We pulled into Woodford around half ten in the morning, stopping first at the Heritage Centre before dropping the car in town. It was a blustery day and forecasts for the week were spotty. The itinerary was clear if changeable: a five-day, roughly-50 mile trek through the Aughty region. We took out our rucksacks and the Rural Future flag from the car. We quickly met Eamon Harte, an elderly man with a hurling pin over his heart.

“Is there any future for the rural?” he said, as he watched the flag flutter.

We spoke and discussed the project. Emma gave him her Aughty map. Eamon hurried home and retrieved a photo of him hanging horizontally from a goalpost. “Ireland’s oldest swinger”, the page read.

“Exchange is no robbery” he said.

Our exit was unceremonial. We reached the town limits and realised we’d both left our phones in the car.

Eamon advised having a cup of tea at the picnic benches down by the “bay” and heading for Lough Atorick. Our plan was to head to deeper towards the Aughty Mountains, but we took his advice. There’s a funny exuberance in being out on the road on the beginning of a long walk. As I went to the bathroom for the first time in a field, I ripped my skinny leg jeans crossing over some barbed wire and fell on my back on a rock. My rucksack took most of the impact. We passed no one on the road that day and gradually worked our way into Aughty country. We’d hoped ambitiously for a swim and realistically for a glass of water from Lough Atorick, but the water was reddish-black. Water lapped into the few boats and the lake still seemed haunted by the memory of the two sisters who drowned there. As the road cut deeper into the Coilte wood, we found uprooted trees lying on their sides, pushing against the forest. Streams ran down from the mountain, but all their water was polluted. It was a long, lonely road.

It wasn’t until we met the East Clare way that we found a clean water source. It was on that small road, actually, that we discovered a small bit of unlikely agricultural industry, first a large polytunnel with plants blooming from all sides, and then a few fields away, two muddied sows. We ascended KnockBeha and happy with out day’s distance encamped near a cliff-face. We had a clear view of The Burren, plus the Derrybrien windfarm in the north and to the west, after nightfall, the lights of Galway. All the major coordinates were laid out before us. The moon rose and the night was wild.
No comments: 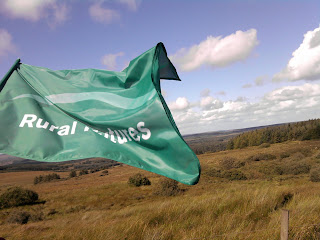 Flying the Flag on the Lough Atorick to Flagmount boreen 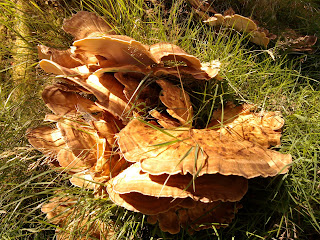 Are they edible? Mushrooms seen on our first day while sheltering from the rain. 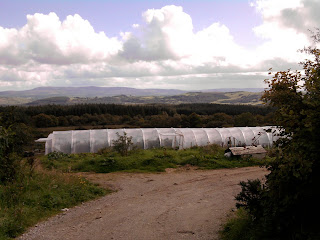 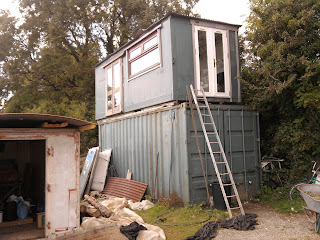 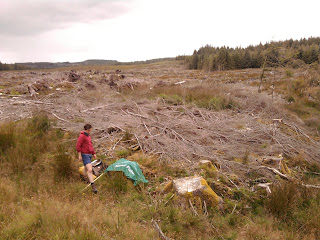 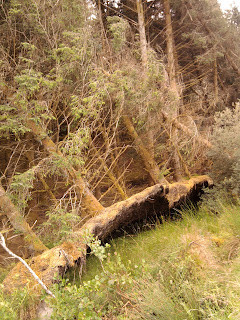 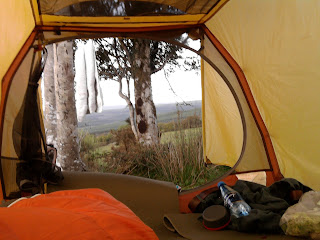 The day started slowly, with porridge and water for me, cheese and crackers for Emma. The route for the day was wide-open, other than a scheduled meeting with Aine Phillips in Flagmount to pick up supplies and Jane Talbot, the photographer who would be documenting the next leg of the trip. The temptation of the day was to climb Maghera, one of the highest peaks in Aughty. It’s tall TV post was once responsible for maintaining the television service for the entire region and had served as a beacon during the first day’s walk.

We followed the East Clare Way around and down Knockbeha, and then followed a beautifully-preserved grassy road that descended right into the village of Flagmount. We met a farmer along the road, heading upwards, who told us we were on the old Mass road. He was a bit reluctant to chat, but eventually revealed he was the owner of Green Island, the small island in the middle of Lough Graney, which under direct sunlight seems to glow. The island had been in his family’s name for over a hundred years. He said he would head to the island every other day to tend to his sheep

“How can we get out there?” Emma asked.

“You can swim,” he said. The farmer provided some of the history of the former landlords around Lough Graney, including the trained ducks who’d settled around the lake.

Sometimes it’s easier to meet people by standing still than by moving. We set up shop in the picnic benches in front of the shop to wait for Aine. We met a blow-in from Dundalk who’d slipped a disc in his back and was selling off his uncomfortable Land Rover, as well as a man who operated weeklong horseriding tours between Flagmount and Doolin.

“Are you wild camping?” he asked when he saw us.

The sun broke through as we set off around Lough Graney on the Caher side, passing the bizarre golf-ball of a bell tower outside the church, and then those ducks, crossing the street single-file. We stopped at the stones honouring Brian Merriman, who’d taught in hedgeschools around the area and Jane helped translate a few lines of the Midnight Court about Lough Graney.

We still had designs on Maghera. We met two men doing some fencing who recommended talking to Raymond, a walking enthusiast in his 30’s who ran Tony Mac’s pub, for some local walking routes. We had to veer onto the main road, instead of exploring the train behind the lake, to reach Tony Mac’s. Raymond wasn’t the exuberant character we were expecting, but we had half pints and crisps in his pub and watched a bit of the Rose of Tralee on rerun. When we finished, it was somehow nearly 5pm and Maghera was a formidable challenge. We decided to keep along our route. Luckily, an English guy came into the pub and advised heading a bit further up the main road to reach the road that cut back down to the lake.

The road cut down closer and closer to the lake, surrounding it at first and then lowering down to a trail that reached the oaky banks around Graney. We faced a sort of conundrum. The oak wood was gorgeous and inviting but closeness to the lakefront would inevitably attract midges and there were only a few dry, flat places to sleep. In the end, we stayed put beside the lake. I had a short swim, the closest thing to bathing I would have over the week. The midges did attack, but we were ready for them. Emma had read on the internet that Elizabeth Arden cream and cotton wool pads can be a great fire starter, and her small fire of foraged dry wood kept them away.

We had a big meal and watched the full moon’s arc over the Aughties, which was doubled on the placid lake. It might have been ideal to be camped on highground to watch the sky explode on that perfectly still night, but there was great peace among those old, old oaks. Falling asleep was like lying in the arms of some great-great grandmother.

We’d noticed white psychedelic mushrooms with small bites in them when we arrived. Roving around with her flashlight in the middle of the night, Emma noticed some slugs enjoying a fungal midnight snack. One can only imagine their visions.
No comments:

The farmer we met on the Flagmount Mass Path shared this Father Ted-like joke with me in relation to the view of his sheep on Green Island. Check out the youtube video at about 0:32
No comments: 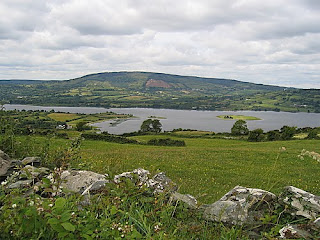 This is Lough Graney (5 x 0.5 km / 100 acres) which I never knew was the biggest lake in County Clare. I discovered later that it is particularly popular with pike anglers.

We met the farmer who owns Green Island, which is in the middle of the lake, at around
10 AM on the old Mass Path above Flagmount. I think he was heading up to KnockBeha
to check on his cattle. He was with his sheepdog. We asked him about Green Island and
he told us that it has been in his family since the early 1800's. It was before his time when last people lived there but he told us the ruin of the old homestead remained.

He asked us if we could guess how many acres it was. I guessed ten and he said it was six, but not a bad guess. Most people guess two acres. I learned later that parts of the lake are shallow enough to cross on horseback. Below: hiking down the Flagmount mass path. 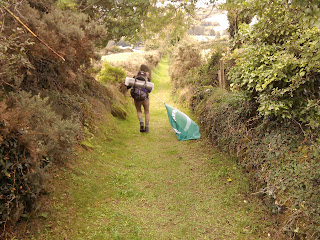 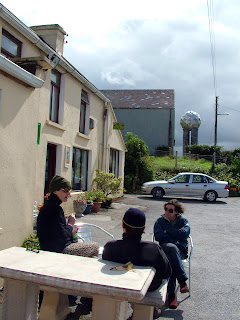 Above: Donny, Jane Talbot and I outside the shop, post office and petrol station in
Flagmount. Flagmount is a small village named for its once abundant flagstones and one
of the main lakeside recreation centres for Lough Graney

Perched overlooking Lough Graney is the village of Flagmount. The late 18th century
poet Brian Merriman’s poem Cúirt an Mheán Oiche was inspired here. Merriman a
local hedge-school master, scandalised the establishment at the time with his social and political satire on rural Ireland. A commemorative stone to him has been erected nearby at Bunshoon Bridge between Flagmount and Caher.

Lough Graney and the River Graney are named after Gráinne, a mountain chieftain’s daughter said to have drowned herself in the lake, thus gaining the unenviable fame of being the first recorded suicide in Ireland. Some associate her with Grían, a Celtic sun goddess. 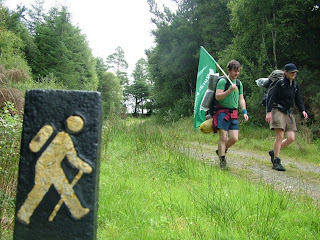 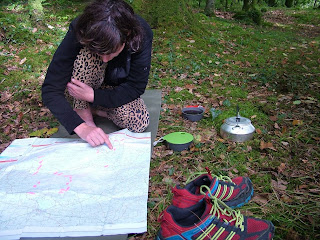 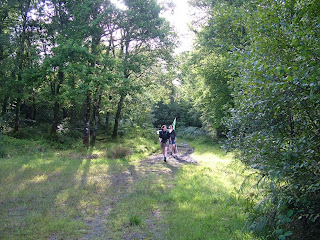 Cahermurphy ( Cathair mhurchu) is the lakeside Coillte forest park. We camped here. Andrew St. Leger from The WoodLand League told me that it a remnant of the great oak woods that once covered East Clare. These he said are recorded in the great epics. Andrew is a wood sculptor and a woodland activist living in Tuamgraney, Co Clare at the of the Slaughty's. Check out his work with The Woodland League
No comments: 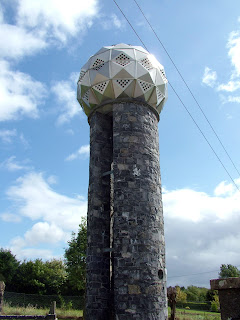 I believe this extraordinary sculpture/bell tower that D and I came across in Flagmount is designed by Joe Noonan. Here is a short extract from his book, 'Songs Recitations & Short Stories'


As a postman - for over twenty years - I have travelled the byways and boreens around Lough Graney. In fact it was only when I became a postman that I realised how little I knew about the parish in which I lived and more importantly about the people and interesting characters that lived around me. I've had twenty years observing, twenty years conversing, and twenty years of learning.

In a hundred years, the hay is ate
And the cattle long since gone,
The money squandered, lost or spent,
And still they sing my song

Joe Noonan, July, 1992
"It is the best of all trades to make songs, and the second best to sing them."
No comments: